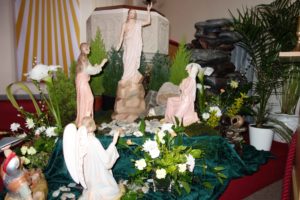 LENTEN REFLECTION
Why are we sinners?
"Because of original sin...Our humanity is wounded.... we try to follow the path of goodness, but we often fall because of our weaknesses and choose evil. The story of Adam and Eve, the rebellion against God described in the Book of Genesis, uses a richly imaginative language to explain something that actually happened at the origins of mankind. The Father sacrificed his Son... to redeem us for his sins... That is why the guilt of our forefathers is celebrated as a felix culpa in the hymn of the Exultet, which is sung during the most important celebration of the year, Easter Night: the fault was "happy" because it deserved such a redemption". (Pope Francis: "The Name Of God Is Mercy." Pub. Bluebird, 2016)

Times of Mass and Services

(Chrism Mass at St Josephs Cathedral at 1130am)

Mass of the Lord's Supper 7pm

Watching the Lord, till 930pm

Celebration of The Lord's Passion 3pm

Stations of the Cross 7pm

(No Morning Mass or Confessions)